Expecting too much from your child could ruin your entire life

Homework is always a stressor for children and parents alike. A six-year-old boy in China was found with grotesque scars on his back. His mother beat him for refusing to do his homework. One of his nursery school teachers discovered them when he changed clothes for physical education class. She was so shocked by the horrible wounds that she took a photo as evidence and reported it to the authorities.

The boy told local police that his mother had beat him with a wire hanger because he refused to do homework. His parents were subsequently interrogated, and they admitted to the fact that the mother had beat him. However, the police decided against pressing charges and gave the mother a warning not to beat her child so severely in future. 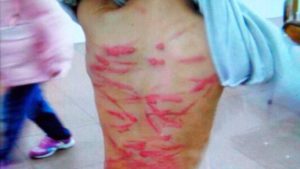 The photo was taken by the teacher. She decided to upload it on SNS after she found that the parents would not be punished at all. The police told the teacherthat the boy was taken to the hospital, and that the wounds were not as bad as they seemed. The red welts just looked far worse than they really were.

There was another case last year, also in China. A mother beat her 9-year-old foster son for not doing his homework and she was sentenced to six months in jail. She had adopted the boy from her nephew living in a rural area so that he could receive a better education. He was beaten with a skipping rope. He was returned to his biological parents after the woman was arrested.

There was another sad news story in Japan. A boy was stabbed by his father who lost his temper at him for not studying. The boy was one of the top students in his sixth grade class and was going to take an entrance examination for a top level junior high school integrated with a high school from where around 20 students are accepted into Tokyo University every year. His father had attended the same school. The father had been expected to become a pharmacist in order to take over his parents business. However, he became a truck driver, so he expected too much from his son.

Many parents pressure their children, but this man was short tempered and could not control his anger. Now he has lost his beloved son and will never have another opportunity to encourage him to study .